Since March 12, 2020, hockey fans have been deprived of live sports entertainment due to the abrupt halt of the 2019-20 National Ice Hockey League’s season. The decision to postpone play was made as a result of the global COVID-19 pandemic and has left many superstars like Alexander Ovechkin, Connor McDavid, and Patrick Kane in a position where they are unable to showcase their elite talents to the world. They, like everyone else, are having to navigate through social distancing practices while they anxiously await to resume play and the NHL marketing team figure out how to pivot.

NHL Marketing: How the Coronavirus is Affecting Sports

Although the NHL’s decision to suspend play was made to preserve the health and safety of players, game officials, and the general public, the postponing of games has been accompanied by serious financial repercussions for professional hockey organizations. Like many other professional sports, television revenue and live game ticket sales represent significant portions of an NHL club’s annual income. However, both of these sources of revenue have been halted to keep everyone safe.

To put things into perspective, the NHL’s current television contract with NBC yields over $200,000,000 annually in the United States alone while the Canadian TV contract is worth roughly $433,000,000 per year. With the league on hold, the NHL will likely be required to provide television networks with some sort of concessions in return for missed games.

The league is projected to suffer a loss of over $1 billion if the NHL season is unable to be played out this year, a concern whose weight increases with each passing day for team owners and league executives.

Despite the massive loss in revenues that affects teams league-wide, the marketing departments of the league and various NHL teams deserve high praise and accolades for their recent and ongoing efforts. Consumers have seen many professional hockey organizations get creative with their engagement-focused marketing as they attempt to remain relevant in the eyes of the consumer. This article will highlight a few of these strategies and will focus on how your company may consider implementing similar marketing tactics.

With tens of millions of fans thirsty for new hockey content, many teams have tried to fill the void through the flourishing industry of e-sports. From streaming game simulations on EA Sports’ NHL 20 to head-to-head video game matchups between NHL players, teams have used esports to help maintain fan engagement.

When the league suspended play, Jake Reynolds, the team president of the NHL’s New Jersey Devils, looked for opportunities to engage their audience. To restore a sense of normalcy to the scheduled season, Reynolds’ New Jersey Devils responded quickly and creatively by attempting to recreate the game-day feeling for fans through online gaming.

The Devils mobilized its content and marketing staff and expeditiously began streaming game simulations using EA Sports’ NHL 20 platform for all of the remaining scheduled regular-season games since March 12. To help establish an even more realistic simulation, the Devils had Matt Loughlin, the team’s radio play-by-play announcer, provide live commentary for the simulated games. They also integrated their real game-day sponsors into their simulations to further add a sense of realism.

On April 30, the NHL commenced the NHL Player Gaming Challenge, an ongoing video game tournament that features all NHL teams, including Seattle’s incoming franchise, and is a part of the NHL’s #HockeyAtHome initiative. Each NHL club chose one or two athlete representatives from their roster to compete in the virtual tournament. In addition to the event, EA Sports and the NHL Foundation have pledged to donate a combined $100,000 to support the CDC Foundation’s COVID-19 relief efforts.

The recent esports matchup between the Vancouver Canucks and the Vegas Golden Knights, which featured fan-favourites Alex Tuch, Ryan Reaves, Adam Gaudette, and Thatcher Demko, was live-streamed last Thursday as part of the NHL Player Gaming Challenge. The stream attracted a sizeable audience across various viewing platforms and generated new buzz on social media for the league and the teams involved.

While the tournament provides fans with the opportunity to cheer for their favourite teams once again, it also allows fans to feel more personally connected to the participating players. While watching their favourite players compete against each other on a highly popular video game, fans instinctively view the players as more personable and relatable.

The senior manager of events and brand activation for the Minnesota Wild, Jim Vanek, perhaps described this phenomenon best when he stated that, “It brings another dynamic when you can have these players on headsets commenting on what’s happening. You hear the banter back and forth. It just adds a whole other layer to the viewing experience.”

The donation that EA Sports and the NHL Foundation are making in support of COVID-19 relief efforts also increases positive corporate social responsibility for all parties involved.

Through social media, many teams across the NHL have been using trivia and contests to help maintain fan engagement. The official Twitter account of the Toronto Maple Leafs, one of the league’s more popular franchises, uses polls to host daily trivia questions to connect with their fan base. These polls consistently result in thousands of engagements and carry no additional financial cost to the team. 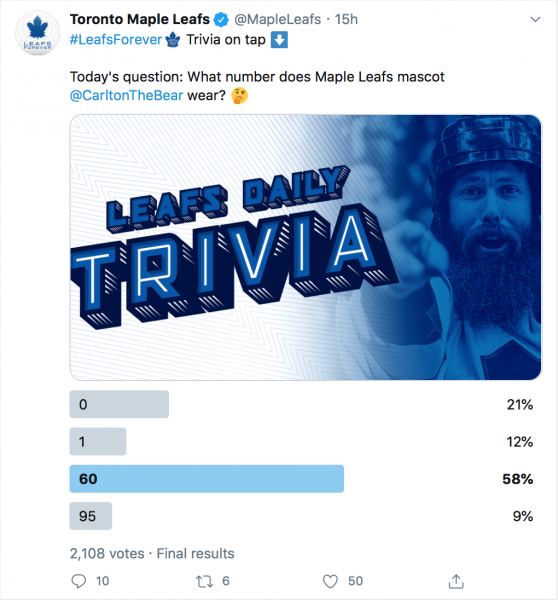 Many teams have also offered fans the opportunity to submit their questions via social media in hopes that their question may be answered in a video response from specific players. This move allows for further connection with fans and is easily implemented by the marketing team. The strategy’s success is visible by the high number of responses that each posting yields.

Similarly, the NHL’s official YouTube page posts #HockeyatHome videos which are highly successful as well, yielding tens of thousands of views per video. The content provides fans with an insider’s view of what the players are doing at home during the coronavirus pandemic. With specific themes for each video such as the “Brothers Edition,” “Couples Edition,” “Meet and Greet,” “Moms Edition,” or “Dads Edition,” the content remains fresh and interesting for viewers. Differing themes also allow the series to reach a larger target audience as different viewers can relate to the varying roles of the featured guests.

Although these engagement-focused marketing tactics don’t result in an immediate increase in revenue, they ensure that, despite the lack of games, the marketed franchises remain relevant in the eyes of their consumers. Plus, conversations surrounding the team continue and grow.

It is important that marketers understand that their consumers may not currently be in a position to spend but will undoubtedly be in the future. The engagement-focused moves are excellent examples of how to produce content that corresponds with the current market demands.

To combat the unavailability of televised live-action hockey games, some TV networks have opted to air reruns of memorable hockey moments, series, and games. This provides long-time hockey fanatics across all markets to relive their team’s greatest (and worst) moments through history while enabling newer supporters to experience them for the first time. Viewers can witness how much the game has changed since the days of hockey icons such as Wayne Gretzky, Gordie Howe, or Bobby Orr. The reruns of old games may even entice former hockey enthusiasts to remember why they loved the game or a certain team so much and spark their enjoyment of professional hockey once again.

As explained in their book “Sport Marketing, Volume 13” by Bernard James Mullin, Stephen Hardy, and William Anthony Sutton, “Nostalgic (remembering and perhaps glorifying a past experience) memories can serve as a source of brand associations. Whether it be recollections of following a team with a family member or friend or remembering the elation felt when a team won a championship, nostalgic memories can serve as a strong source of association.” 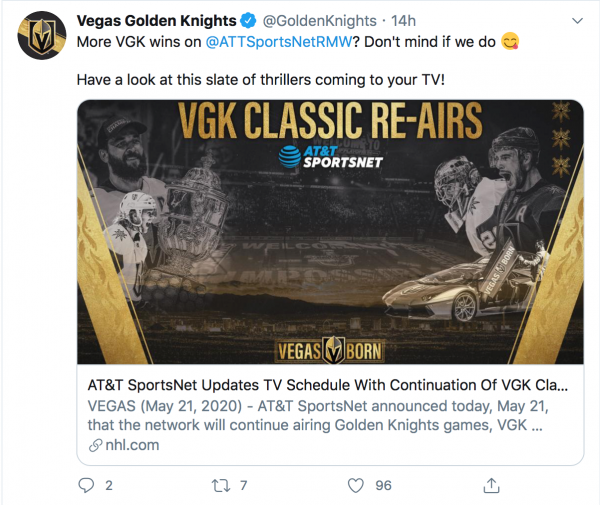 On May 21, AT&T  SportsNet announced their updated schedule which includes game airings of the Vegas Golden Knights’ historic Stanley Cup run from their inaugural season in 2017-18. It was a major hockey story that was intently followed by fans across North America, and this package will undoubtedly generate excellent ratings and will help to subsidize the loss of the aforementioned television revenue. Remember, these games are previously generated content and will air at minimal additional expense to the network allowing them to produce more of them.

Capitalizing on pre-established emailing lists during this time is also very worthwhile for companies of all sizes. According to the Direct Marketing Association, email marketing averages a 4,300 percent return on investment for businesses operating in the USA. Email marketing also frequently yields a higher conversion than social media campaigns in many different industries. Understanding that email marketing is especially lucrative in the current market can assist businesses immensely if the marketing strategy is executed correctly.

The Vancouver Canucks, for example, have been wisely sending weekly “member updates” to their 2019-20 season ticket holders to keep them both informed and engaged. The email updates include opportunities for members to chat with Canuck players and alumni, video updates from players, COVID-19 updates, and even recipes from the Canucks’ kitchen. 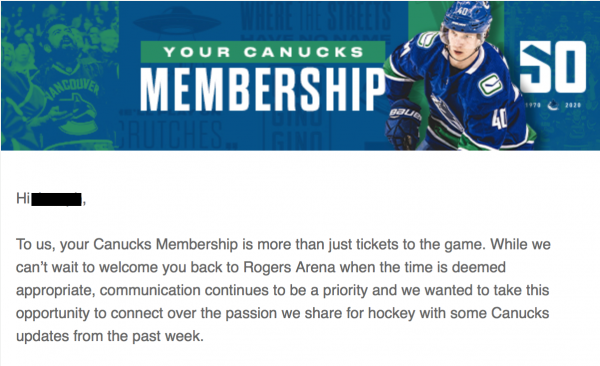 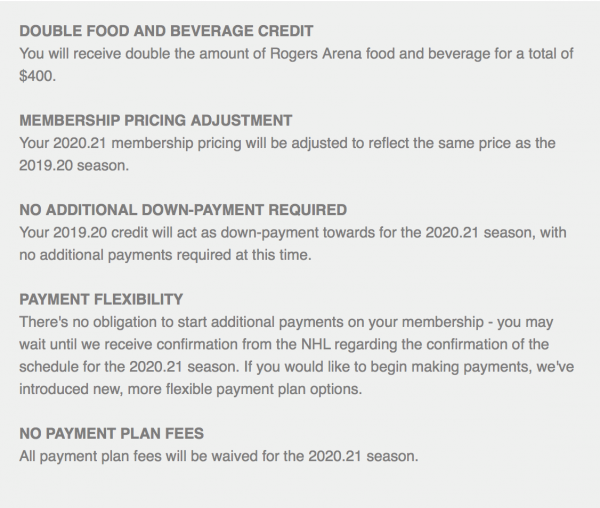 In a recent email, members were incentivized to renew their season ticket subscription with additional food and beverage credits, membership pricing adjustments, a waived down-payment upon membership renewal, payment flexibility, and waived payment plan fees. Although six home games at Rogers Arena were postponed, the Canucks have offered a refund option but are also providing incentives for fans who wish to carry the remaining balance over to next season. These incentives push members to become repeat customers and are a useful component of email marketing.

Struggling to Implement a Successful Marketing Strategy During COVID-19? We Can Help!

Patrick Henderson
After playing hockey his whole life, Patrick finally realized he wasn’t talented enough to make the NHL and too much of a nerd to let his analytical personality go to waste. He takes great pride in generating ROI focused strategies for clients by understanding the needs of their customers.
More Articles | Profile

SEO, SEO
What Is SEO?